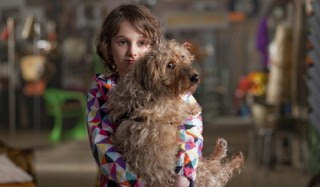 New Dutch film spells big opportunity for girl with English connection. TheBigRetort profiles rising star Pippa Allen.
Originally titled "Patatje Oorlog“ - “Patatje Wars” [War Fries] is based on the acclaimed book "A Little Chance" by Marjolijn Hof, and traces the lonely life of nine-year old Harriers (Pippa Allen) who constantly worries about her father, a doctor who has left home to work in a war zone. What if he gets a disease? What if he stands in the way of stray bullets? What if? Just a few of the fears that beset young Harriers on her angst-ridden journey towards an inevitable conclusion.
In order to reduce the risk that something bad may happen to her father Harriers journeys into the strangest corners of her mind.
Her fantasies are portrayed in stop-motion animation combined with live action; extraordinary for a Dutch film. It is due for later release with English subtitles - hence the title “War Fries“.
But what of that English connection?
Pippa, who is bilingual, was chosen for the role amidst thousands of Dutch hopefuls. Her grandparents live in Brockley, southeast London.
Rising starlet “Pip” is a regular visitor to their Manor Avenue house with father Paul and her equally talented brother Tommy, a gifted little comedian and break dancer.
War Fries is directed by Nicole van Kilsdonk (How do I survive Saddle Pain ).
In the roles of Harriers parents are Johnny de Mol and Rifka Lodeizen .
War Fries will premiere at the Cine Kids Festival in Amsterdam from the 12th-20th October, and is then intended for wider general release.