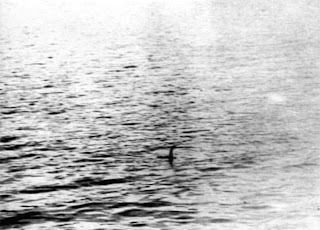 The Loch Ness Monster has fascinated the public imagination for decades. TheBigRetort uncovers movement in the waters of the loch, and finds not a demon but an altogether more simple explanation rippling beneath the waves of our imagination...

As a boy I was hugely intrigued by tales of a monster that had been sighted in a loch in Scotland. Down the years various attempts at capturing or photographing the ‘monster’ resulted in evidence that was fuzzy, or at best vague. The monster just refused to surface... In fact "Nessie" seemed quite stubborn.
When I was a boy I spoke as a boy and when I became a man I cast aside childish things - questioned everything and everyone and did the research, back and back I went...

In 1755, one of the most terrible earthquakes visited Europe. Curiously way up in the north, Loch Ness was also affected by the event. Did the seas rise, I wondered one night as I tried to sleep.

Over a hundred years ago, before the monster was sighted in the loch, a great earthquake occurred at Lisbon...

Many miles away the waters of Loch Ness were also disturbed by the event. [Aberdeen Journal - Saturday 21 September 1901.]

So the waters at Loch Ness were disturbed by earthquakes far far away; and long before the very first sighting of "The Loch Ness M-o-n-s-t-e-r".

[The Evening Post. - Saturday 21 September 1901] "THE EARTHQUAKE AT INVERNESS. ITS PECULIAR EFFECTS. DAMAGE TO PROPERTY. [Evening Post Special.] The populace of the town and the many visitors the Highland capital who experienced the earthquake shock on Wednesday morning will not be in hurry to forget what they underwent between the hours of one and two of the 18th day of the month the first year of the 20th century. Nor can they be blamed, for the shock was one like unto those in recorded history, fearsome and destructive, which are looked upon by the present generation as only "luxuries" of the past. The disastrous effects of Wednesday's catastrophe will never wholly be known, but such as are known are sufficient to show that it has been the most destructive earthquake ever felt in the Highlands.”

The newspaper report went on to highlight “PECULIAR EFFECTS“.

'An "earth wave" at Inverness had the most peculiar effect on the Canal, causing it to combine with the River Ness, and act as sort tidal wave.’

A terrible eruption had taken place on the bed of Loch Ness... This caused a huge volume of water to sweep northwards across the Loch.

Significantly the report intimates the true origins of the ’sea monster’: The earthquake had emanated from Loch Ness, ‘that loch which has many peculiarities, and which has baffled scientists in their attempt to fathom it.’

So: Loch Ness had long baffled scientists; before it started baffling the common (and superstitious) folk. Curiously, just one year after the creature was itself sighted, a prolonged shock was recorded at the loch in 1934. It lasted 15 minutes. And more shocks were 'felt' beneath the loch, suggesting that it was still active.

And so, it is from this dodgy ground and the resulting choppy waters that the Loch Ness Monster finally surfaced.