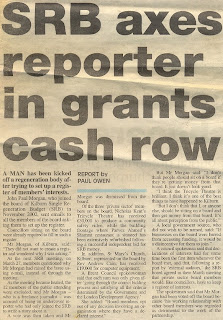 This regeneration Programme supported a number of projects over a period of six years, but after the big bucks were exhausted, what did they actually achieve?

By 'they' one means those members of the Board charged with caring for the money that was filtered their way. And there was loads...

The report’s author, Sean Baine (on whom more later), claims that ‘to ascertain this fully would require in depth evaluations of each project which was not possible within the scope of this evaluation’. Which is just another way of saying I was not commissioned to look. Or, rather, I was commissioned not to look.

Not the only item of note left out of the Baine Re-evaluation – members of the Kilburn SRB (who funded the report) were accused of using public funds for their own self-interest. One local best described them ‘as pigs at the trough’.

But here, I too must declare an interest…. as the community representative (and reporter) that the Board dismissed.

When I called for the creation of a Register of Members’ Interests, I had just joined the Board in November 2002. I quickly discovered that many sitting on it were in fact gaining financially in one way or another. By March the following year, a register was still not in place - and this after millions of pounds (sterling) was allocated. As a result of emailing Board members, who were reluctant to create a register (one accused me of ‘cyber bullying’)I was ‘axed’ (See Kilburn Times, June 11, 2003, p1.) Ironically, the meeting at which I was dismissed had been called to discuss setting up the register. Board members questioned why I had sent the e-mails instead of airing my views through the meeting. (A bit of a chicken and egg situation I know.)

The story takes a bizarre turn… The Board in its paranoid state accused me of being an undercover journalist who had come to write a story about it. I had declared my credentials prior to being voted in and was puzzled by the 'accusation'. Also it would have been highly unlikely to get any story published if it had been acquired by deception... Unless it revealed wrongdoing. However, a local vicar, a beneficiary of funds and a board member (not unusual on Kilburn SRB) had steadfastly refused to declare his business interests - and fuelled much of what followed. (I already knew from Company's House files that amongst appointments held by the reverend was a company styled “beauty parlour”.)

But the funds trickling down the Kilburn High Road to SRB member projects and/or businesses and the amounts acquired were by no means seen as unusual by the London Development Agency. Although Paul Owen of the Kilburn Times [kilburntimes.co.uk] did not report it at the time the funds were in excess of those above and still, a local government source who did not wish to be named (do they ever?) said "If businesses on the board were barred from accessing funding, it would be a disincentive for them to join."

Disincentive? Like Judas board members knew the value of 30 pieces of silver.

But what about the Kilburn SRB Programme, what was it aimed at, and, more importantly, did it represent value for money?

I believe the answer to at least one (if not all) of the above questions represents an own goal to the London Devlopment Agency. Unfortunately value for money was yet another item that the Baine Re-evaluation could not access. ‘This would involve looking at the unit costs of particular programmes and projects i.e. the cost of individual outputs. However this is very difficult to calculate…” etc.

What guff! And why?

In words of plain speak the author (more on his services in a later posting) did not 'consider it useful' to carry out any specific value for money calculations. Why not? This was one of the main items of interest for those local community groups who did not manage to ‘pig out at the trough’. (Kilburn had an agreed allocation of £6,598,800 and the potential financial gain in the wrong hands was therefore enormous.)

Such was the turmoil surrounding the Kilburn 'project' that an experienced manager from the London Development Agency was appointed as Programme Manager - Alan Dorricott. So this then was the LDA managing its own spend, with its very own Rottweiler, but without delivering bite (or rather value). Something that the George Baine report failed in its entirety to 'access'.

But, to be fair to all concerned, was there a blue flashing light on the horizon?

The report rightly claims that towards the end of 2002 complaints started to emerge from 'a small number' of local residents. One individual approached me after my being voted onto the board. Charlie's complaints, as with others, initially centred around the ‘spend’ that covered many aspects of SRB expenditure. However, an attempt at getting a sympathetic ear from the board members proved impossible, made an ill man even graver, and so he would sit ever-present at meetings, silent, waiting to be 'heard'. And never was.

Another complainant, Graham Bacon, seemed particularly hot under the collar. But he was also more vociferous than Charlie. And the more he was sidelined the further entrenched in his accusations he became... His voice grew ever louder. Something the board moved to defend itself against. (Bacon was reported to police. Programme manager Alan Dorricott was himself a former senior policeman. However, no charges were ever brought against Bacon and his character remained unblemished by any board-directed accusations. Soon others would join the voice of this marginalized 'crank'.)
But back to the report (which is also back to Bacon actually)…

Baine claims that ‘actual civil and criminal legal proceedings and complaints to the district Auditor’ were brought, which is partially true. The claims were brought by Bacon against board members or, specifically, Dorricott. But it remained a civil matter only.

Why should the report suggest criminal proceedings when it is clear there were none?

Author Sean Baine (sometimes he uses the first name George) displays his great aptitude for bias when he adds more whitewash to the blemish,‘evaluation has not examined the issues raised by the complainants nor come to any conclusions about their validity.’ Which is about where Kilburn-based Baine should have left it. However, instead he goes on to dig himself into the Kilburn High like a well-practised navvy. ‘However they created an atmosphere that was damaging to NCK and, particularly, to plans to have greater involvement by the local community,' he adds. 'Individual members of the Board felt threatened and under attack while individual staff members felt harassed. The effect of the actions of the individual residents, and the manner in which they acted, could only be detrimental to the working of NCK and any future promotion of Kilburn as a distinct entity.’

Now if that isn’t coming to any conclusions then what is?

The report continues… “Community involvement in the programme was always problematic. This was compounded by the actions of a few individuals in the area who brought complaints against board members and programme staff which affected both morale and commitment to the programme.” However, the biggest giggle in this roll-out-the-same-old-barrel-of-laughs comes under the label ‘COMMUNITY PARTICIPATION’.

“Community involvement and capacity building is a pre-requisite of the sustainable regeneration of the area. We will involve the community under each programme theme, ensure that every project adds capacity to the local community and that the community itself plays a lead role in project appraisal and delivery.” Sean Baine ends his report with a worthy and fitting statement… ‘the sum did not equal more than the parts’. (Not really a reference to what he was paid to deliver, but what he managed to deliver perhaps.)

Well done George from all @TheBigRetort.

[Footnote....The SRB Board later voted that a Register of Members’ Interests was needed. And that it should remain closed to the public (and press). Further reading of this sordid tale continues below...]

Participant
I wondered what the Mayor and London Assembly members would think of an SRB that did not set up a register of members' interests until its sixth year of operation and then kept it secret; that did not hold annual general meetings open to the public, contrary to its own rules; that dismissed a duly elected member of the public without having the powers to do so and then took the powers retrospectively?

Toby Harris
Do you want to give us a hint as to which SRB partnership it might be?

Participant
Personally, I am from the Kilburn and Bromley [actually 'Brondesbury'] Residents Association Group and I think you can work it out.

Ken Livingstone
You need to tell us because there are literally hundreds of SRBs.

Participant
The Kilburn SRB does not hold annual general meetings, it has dismissed a community representative without having the power to do so, it refuses to divulge accounts of activities that it has funded and it has given the majority of its grants to individuals and organisations connected with board members.

Ken Livingstone
I will ask the London Development Agency to look into it and report back to me.
at May 30, 2007

Email ThisBlogThis!Share to TwitterShare to FacebookShare to Pinterest
Labels: CORRUPTION AND THE LONDON MAYOR