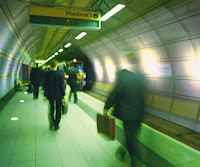 THE NEXT TIME YOU TAKE THE TUBE... MIND THE MAP.

The London underground 'map' was created by graphic designer Henry C Beck (pictured below) in 1933.

'Harry' Beck, as he was known, was an engineering draughtsman at the London Underground Signals Office. Less map more diagram, sheer simplicity is what makes the 'map' so user-friendly. He constructed the diagram in his spare time. Harry had the idea of creating a full system map in colour. He believed passengers riding the trains weren't too bothered about the geographical accuracy - this was way before the Congestion Charge - but were more interested in how to get from one station to another and where to change. The idea has since been emulated around the world.

Harry continued to update his Tube map on a freelance basis. [The Victoria Line was added by someone else and many additional changes were also introduced, without Harry's approval.]

Harry struggled furiously to regain control of his map down the years. Unfortunately for him, responsibility was eventually given to a third designer Paul Garbutt. Ironically, he changed the style of the map to look more like Harry's map of the 1930s. Harry too attempted subsequent versions, but the workplace, like the underground, is forever evolving, and Harry became persona non grata. He continued to make sketches and drawings for the map until his death aged seventy-one.

After long failing to acknowledge his importance as the Tube map's original designer, London Regional Transport relented and created the Beck Gallery where his works can be seen.

Transport for London started to credit Harry for the original idea and his name now appears on modern Tube maps.